Please try not to hold that against me. Unlike most Ford owners, I certainly do not try to suggest they are the best cars on the road!!

It's just that I have a reputation for my preferred discipline (Top Speed) and my car, even after 8 years of ownership makes me feel like this......

what ford you running then?
take it its a cossie! had a couple myself in the past.
where you based?
O

pulsarboby said:
what ford you running then?
take it its a cossie! had a couple myself in the past.
where you based?
Click to expand... 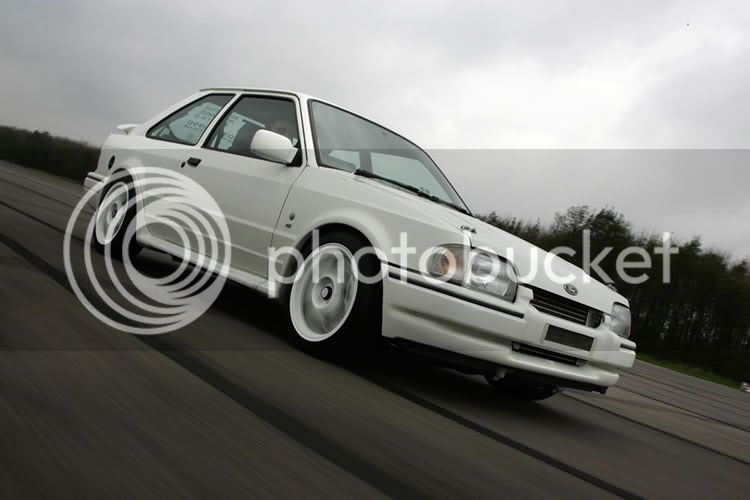 It's still fitted with the Block and Crank that it rolled out of the factory with and a standard head gasket. It is 1600cc and has 8 Valves. Fitted with a GT30 turbo.

Timed officially at 168.9mph Vmax at 2 different runways (fastest Escort RST in the world according to Performance Ford). I have to focus on Top Speed as that's all it's good for!! LOL. It's geared for 183mph (which the laws of physics will prevent it from reaching!!) and will almost certainly break 170mph this year, I am actually fairly sure that I have already done 173mph at RAF Woodbridge (according to logs of RPM, versus my gearing), but until it is verified, that is just hearsay.

Well, it does give me a rush to drive, no question. Infact so much so that I haven't wanted to replace it (even having driven 400+bhp 200SX's).

Enough of that here anyway!! I don't want to take this thread too far off-topic!!

Staff member
Even I knew that, where have you been boby

So what brings you over here? Bored with Fords?;-)
C

Fast Guy said:
Even I knew that, where have you been boby

So what brings you over here? Bored with Fords?;-)
Click to expand...

No, to be honest, I was Google'ing (as I do from time-to-time) to see where our company gets mentioned and picked up a reference on here, so stopped by for a little look. One or two cars we work on belong to members on here I think.

Apart from Odin, you all seem like a friendly bunch, even with an Alien in the camp!!:lol:

(BTW, just banter Odin, though I'm sure you will bite back!!!)


Hahaha. You've got him sussed
O

Christian & Beccy said:
(BTW, just banter Odin, though I'm sure you will bite back!!!)
Click to expand...

Anyway I like the Ford fella, I drove a few of them when they where new and loved every min of it 8) , You can't beat a good old classic ford .

I've owned a few myself.

I nearly bought a new XR4i but it was already rusty under the bonnet :shock: :roll: , So that was the last one I looked at until we bought are new Mondeo ST diesel that we have now .

Very tempted to get it chipped :twisted: .

Hey, thanks for the 'Gay' reference. I don't usually shorten my name though!! LOL. I do get called worse things the 'Chris' though, especially when I tell the missus that I want a new Turbo.

Regarding the Derv, anyone that owns a 'Chippable' Diesel that can be remapped but doesn't do it needs their head examining. With petrol tuning, it is sometimes questionable whether a mod will 'work', but with Diesel tuning, there is really a 100% success rate and usually improved economy too.

Believe me though, 290bhp at the front wheels, weighing under a tonne is an experience not to be missed. It's the best security device of all really, knowing that a cap-wearing chav that may fancy his chances at stealing it probably won't make it more than 3 miles before it has him off the road. At least then I would have an excuse to 'break' it and move on!!! LOL.
C


I've been called far worse in my time on the forum lol.