alright guys looking for some advise

I have been having trouble with the radiator hoses, I noticed that the small top rad hose was leaking slightly and kept an eye on it, I tried taking it off and getting a good seal but it burst on me a few days later sending steam everywere in the highstreet , I wasnt too worried as it looked as if it was just the old hose giving up the ghost, but from what she was like before the rebuild the hoses seem to have some serious pressure going through them now, I tried bleeding the system as much as possible but the hoses actualy bulge out quite alot, the second hose I have just put on has started leaking a week later, im just more concerned with the excessive pressure that I didnt notice before rebuild at all.

also I was checking the oil etc and I took the leads out just to clean around the rocker cover and found that the first one was completely full of oil, you cant realy see from the picture but you get the idea, would this likely be the seals on the inside of the rocker cover that could be causing this? 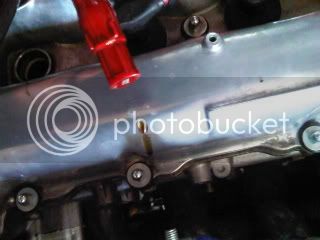 I have only done about 600 miles on the engine

What head bolt's and gasket have you used? and did you torque them up properly? and has your head been skimmed and did you have the block and oil pump cover skimmed bolted together?

The oil in the plug hole is probley the seal.

I didnt build it myself mate, no time so thought to pay for it to be done a while back, I believe it was a cosworth gasket but I would hope everything that you have said was done as I know the surfaces need to be mated together and skimmed otherwise when its put back the oil pump will be not correct hight, are you thinking that one possibility could be a dodgy headgasket seal and presurising the rad

how is best to check and try and bleed an air lock out, i used the bolt on the thermostat to bleed it

shroom said:
how is best to check and try and bleed an air lock out, i used the bolt on the thermostat to bleed it
Click to expand...

is that the little bolt on the block,think its just above the clutch slave cylinder
P

it does sound as though something has failed tom
either headgasket or arp head studs 'if they were fitted' deffo should not be running that kind of pressure.
also check your rad to make sure that it hasnt got a blockage as well as the thermostat

johnsy said:
is that the little bolt on the block,think its just above the clutch slave cylinder
Click to expand...

no just i think its the top bolt on the thermostat that you can unscrew just to let the air out if any,

pulsarboby said:
it does sound as though something has failed tom
either headgasket or arp head studs 'if they were fitted' deffo should not be running that kind of pressure.
also check your rad to make sure that it hasnt got a blockage as well as the thermostat
Click to expand...

I will try and take a picture of the larger pipe going to the thermostat but the clamp holding it onto the thermostat it bulges over that I noticed it straight away and thought it was odd as yes it has pressure in it when up to temp but seemed alot more.

I am not totaly sure if arp headstuds were fitted, I based the build on the price that mutant motorsport Ed I think his name is up north had his forged rebuilt engine on ebay with the parts been forged pistons, arp rod bolts, cossy gasket, new oil pump etc so I just copied that spec :lol: as I know you dont touch the headstuds for these sort of reasons,

I will check for blockages but that just means taking loads of shit off :doh: one step forward and about 40 back :lol:

Staff member
Is your thermostat knackered? - I think Lisa just blew a hose on hers because after changing all the hoses on the back of the block the thermostat blocked.
S

Another way to get air out is to just put a hosepipe in your rad filler and leave the engine and hose running.

yes I suppose it is a possibility that it could be broke, but why break as soon as its rebuilt lol, I will try that skiddus but my fuel pump on my 306 has just gone so I am fucked without any car now fun times